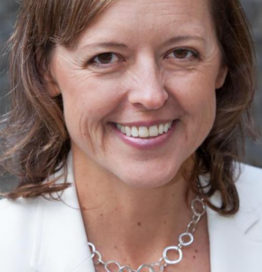 Julie Mikuta is co-president of Charles and Lynn Schusterman Family Philanthropies and leads the K12 Education portfolio. In this capacity, she oversees their strategy and investments in increasing the number of low-income students, especially students of color, who graduate from high school ready for college and the workplace. Mikuta joined the organization in 2013 to build the Education portfolio and team.

Prior to joining Schusterman, Mikuta was a managing director at NewSchools Venture Fund, focused on teacher preparation. Previously, she led trainings for school board and superintendent-teams of large urban districts at the Center for Reform of School Systems. Mikuta also served as an elected member of the D.C. Board of Education from 2001 until 2004. During her time on the school board, Mikuta was vice president of alumni affairs for Teach For America. Mikuta began her career in education teaching high school science in New Orleans through Teach For America.

Mikuta graduated from Georgetown University, where she was captain of the women’s basketball team, and did a doctorate at Oxford University, as a Rhodes Scholar. Mikuta is on the boards of Stand for Children and New Meridian, as well as the Yu Ming Charter School.