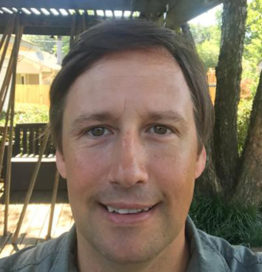 Jason Milks is the director of strategic partnerships, Freshwater at The Nature Conservancy in Arkansas. Milks received a bachelor’s degree in fish and wildlife management from the University of Arkansas at Little Rock, and a master’s degree in forest ecology from the University of Arkansas – Monticello.  He joined The Nature Conservancy in Arkansas as a prescribed fire project manager in 2005.  In 2011, he became the Delta project manager and was promoted to a program director a few years later.  His work in the Delta has been focused on increasing reforestation and wetland restoration, improving water conservation on working agricultural lands, restoring stream and floodplain function, and developing partnerships with other non-government organizations (NGO’s), private foundations, public agencies, elected officials and corporations. He previously worked as an ecologist with the Arkansas Natural Heritage Commission and a waterfowl technician with Ducks Unlimited.  He enjoys recreating outdoors, especially waterfowl hunting or fly fishing, with his family: Ashley O’Neal, Basham (11), and Hannalee (10). They live in Sherwood, Arkansas.

Case Study: Businesses and Nonprofits Working Together to Help the Environment