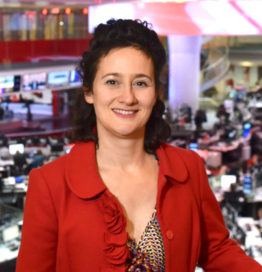 Emily Kasriel is head of special projects at the BBC World Service, with decades of experience as an editor and reporter across all five continents.

She has researched Deep Listening as a practitioner in residence at the Marshall Institute at the London School of Economics, speaking to psychologists, lawyers, as well as multiple academics and practitioners. Based on her research, she published an article about Deep Listening for the Stanford Social Innovation Review.  She will soon take up a role as senior visiting research fellow at Kings College London Policy Institute, researching in this area.

Kasriel has recently led the BBC British Council Crossing Divides around the Globe project, with 1000 young people from 119 countries being selected for her training in Deep Listening to celebrate the BBC centenary – following a pilot of 150 in Lebanon.  She has also trained 300 IBM executives from across Europe in deep listening as well as executive coaches from multiple organizations and cohorts of leaders from the British army to McDonalds, GSK to the Cabinet Office.

Previously she has been a visiting fellow at Said Business School and a senior advisor to the Skoll Foundation, as well as hosting events globally and writing for a number of publications